So if you read our blog or follow us on social media, you will know that three weeks ago, we made the decision to have our small boy’s adenoids and tonsils removed. This meant surgery.

An adenoidtonsillectomy as the procedure is know, is not something that is done regularly now. It used to be common for children to have their tonsils and or adenoids removed but today it’s regarded as a procedure that is only done if really needed, and most children with recurring tonsillitis will be treated with a watch and wait attitude rather than having them removed surgically. His sister had her chronically infected tonsils and badly enlarged adenoids removed when she was seven, and it dramatically improved her health and quality of life.

Matthew did not have tonsillitis, and never has needed treatment for this.

So why did we opt to have them removed? Why sign up for surgery?

I have suspected for a while that his tonsils and potentially his adenoids were very large and because his father and his sister needed them removed, I knew it was probably something that he would need to face, due to the fact that there is a genetic link if a parent needs the procedure. Our ENT and GP have had us in a “watch and wait” pattern, because they didn’t seem to be bothering him that much, and because they weren’t making him ill with tonsilitis, and also because of his sensory issues, and putting him through surgery and the pain of recovery, if he didn’t really need it. In the back of my head I knew it needed to happen though.

When we were on holiday in the summer, I happened to notice that when he was asleep, that his breathing pattern was not regular, particularly when he was deeply asleep. He would breath hold and gasp, and was very sweaty, and restless. He also snored, very loudly. The snoring has got worse over the past 18 months.

I am an ex nurse with ENT experience, so I knew that the breathing and snoring probably were not normal, so off we went to the GP, who agreed a visit to our ENT was worth it, so that was booked.

Our ENT took one look in our boy’s throat and pronounced “oh yes, those are huge, let’s get those out”. He explained that not only were his tonsils huge, but they were flat around the edges, which meant that when he was lying down, they were so big they were pressing together, and likely obstructing his airway when he was asleep.

When your body isn’t getting enough air, because your airway is being constructed, it produces too much carbon dioxide. Your brain reacts to this, by trying to wake you up, so you don’t fall too deeply asleep. Basically, his body was waking him up because he couldn’t breathe properly. That’s the simple explanation for it. It explains why sleep has been so poor and had gotten worse again in the past two years, at least. There is nothing that can be done for this, but to remove the obstruction, aka the tonsils and adenoids.

So, my brave boy had surgery. He was calm, he handled being put to sleep for the operation like a pro, and despite some pretty rough moments, post op and during his recovery, and a serious lack of sleep for all of us (the husband and I kept telling each other “it gets worse before it gets better right??”) he recovered well, and has been discharged by his doctor and went back to school yesterday. We knew the risks, and what could happen if things went wrong (rare) but we also knew we were desperate and something had to be done, and this seemed like the answer.

Was it worth it? Did we do the right thing? I will admit to having moments during his recovery when I felt like we had made a bad choice and put him through surgery and pain, and that we were being selfish but today, I can tell you that he is now sleeping peacefully, and properly, for 10-11 hours a night. He doesn’t snore, he doesn’t do the ghastly breath holding any more. He is not waking up 2-3 times a night, some nights, as he was before. If he does wake, he goes back to sleep easily. He isn’t sweaty and restless.

Sleep is so important, not just for tired parents, but for children. A child his age needs good quality sleep, to be able to grow, function and thrive. Waking in the night, and poor quality sleep affect health and behavior. We can already see a vast improvement for him. Sleeping better will help him to cope with life.

The surgeon and anesthetist came to see us after the surgery and told us that his tonsils were “as big as golf balls” and his adenoids were very enlarged. They both were emphatic that he would start to feel better with having them removed. I cried. It’s hard to think that something so simple could be causing such a dramatic issue.

So, yes, it was worth it. We have faced doubts of our own, and also criticism and unhelpful comments from people around us, who I think simply do not understand what we and he have been through, in terms of sleep and his sensory issues, and who judge us, based on not being willing to see beyond their own horizons.

But, we made the right choice. He is happy, he’s sleeping better, he is feeling better, and that’s the most important thing. The risk of surgery and the recovery were worth it. Sometimes we have to make tough choices that other people can’t see the why behind. I would do it again in a heartbeat… 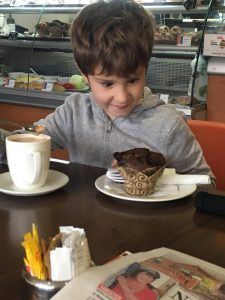