This is a cat’s tail (see what I did there?) of woe, otherwise entitled, “Jasper got in fight and we had ANOTHER trip to the vet…”

Jasper is a bit of a rogue, he’s a bit like Del Boy from Only Fools and Horses (yes, I am that old!!) with a kind heart but sometimes he doesn’t use the brains he was born with and he acts before he thinks…

He basically will pick fights with cats much bigger than himself (and he weighs over 5kg so he isn’t a small cat either)  and this time he came off worse.

He came home last week, one morning for his usual breakfast, but he didn’t eat, which in itself is unusual, and he sat on the bed, looking very sorry for himself. I knew something was up. He’s pretty tolerant, so he let me look at him and check him over. I found four bad bite wounds on his face, ear, leg and stomach and he was covered in blood.

Thankfully our vet is always able to fit us in and a quick call later, and off we went with a very unhappy cat in his carrier.

The vet looked him over, took his temperature and found not four but five deep bite wounds. He had to clean them all, and he also took Jasper’s temperature and found it to be quite high.  He deduced that the bites were cat bites and cat bites can get infected and quite fast. So poor Jasper had to have an injection of antibiotics and an anti inflammatory medicine. To be fair, he is pretty calm and doesn’t fuss much at the vets, but I think he was pretty over the whole thing by the time we were finished. His wounds were dressed and I was handed pain killers, oral antibiotics and advice on how to keep his wounds clean and he was sent home.

He was grounded for two days which he hated, whilst the wounds started to heal and I was sure that he was on the mend. He didn’t like that one bit. He’s an outside cat who likes to be out exploring (and fighting other cats) so he was pretty grumpy. He also didn’t like being swaddled and made to take medicine twice a day (the only way I could get him to swallow the tablets, he won’t take them in food) for a week. My hands didn’t like it much either, as he did scratch me a few times in protest. He didn’t much like having his wounds inspected and cleaned either.

He just looks at me with a sort of “what did I do wrong?” look when I lecture him on the perils of fighting with other cats (there is an enormous ginger cat that has moved into the street, I suspect that is Jasper’s sparring nemesis) and trots off into the garden…

Just as well cats have nine lives really, he certainly likes to try and use them up…. 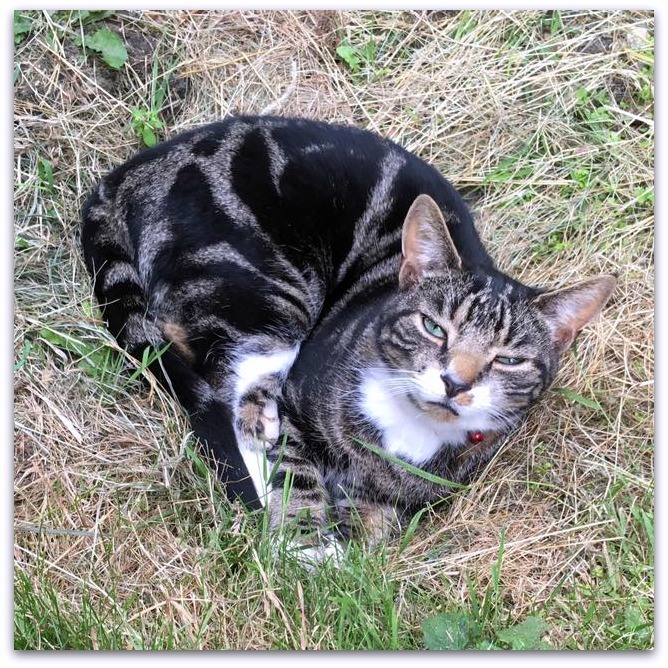 Nope, I never pick fights with cats bigger than me, honest, I don’t.