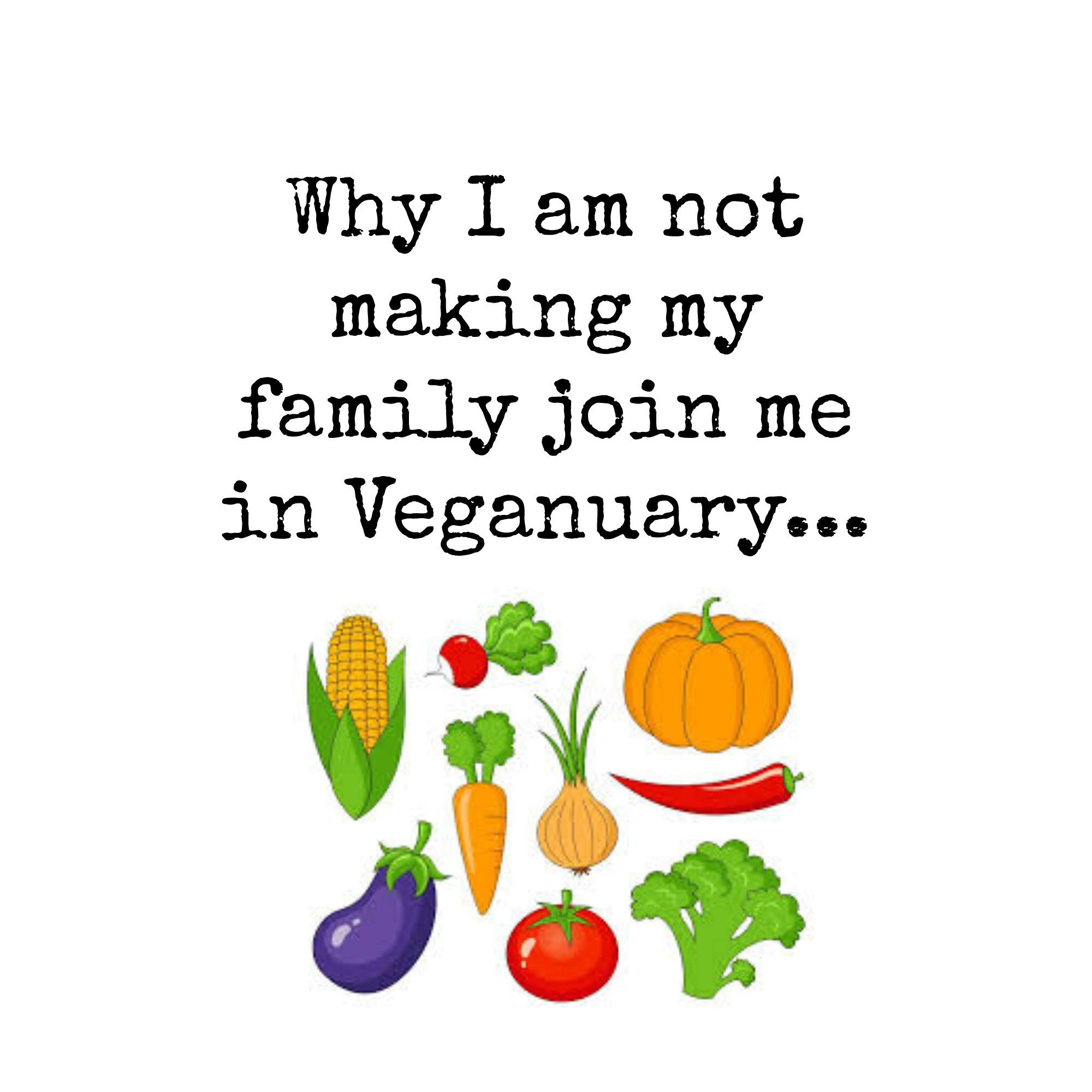 If you are active on social media, and aware of the trends of the year, then you will know that a lot of people are doing what is called “Veganuary” or “Veganjanuary”. Some people have gone from being meat eaters to giving up all animal produce and meat, and some people have transitioned from being vegetarian to vegan. Some people will do the month, and stop and some people will carry on. You can find out more here about what it’s all about and signing up if it interests you.

Some people are doing it for health reasons, some for ethical reasons, some to see if a vegan lifestyle works and is practical for them. There are many reasons, really.

I already pretty much don’t eat meat, and gave up last year and I have been eating vegetarian with some fish in my diet for most of the last year.

I decided to try Veganuary, and see what worked and what didn’t for me. As a family we don’t tend to consume much cows milk or dairy due to the husband and small boy having a cows milk allergy, so I do cook a lot of what could be considered vegan meals, but they still eat meat and fish.

I am doing Veganuary partly to see if I can manage without cheese and eggs, for a month, for myself, and also to experiment with healthier meals. If done properly, a plant based diet can be very healthy, and as I am trying to loose a little weight, I thought it would be good to try and combine the two. Whilst I miss cheese, and replacing eggs is a bit challenging, I am enjoying the challenge so far. There are days when I think I could be vegan all the time and other days when I am not sure. A month will be telling, and I plan to update as I go. I do believe that the food industry doesn’t do looking after the animals that are used for food at all well, and that animal welfare is not at all what it should be, and there are already some animal based products I refuse to eat because of the way they are “produced”, and I am doing reading on plant based verses vegetarian, versus a carnivorous diet.

People have asked me if I am making the whole family eat vegan, and my answer is no.

I am cooking for them, and me, and some meals, like for example, dinner tonight, will be entirely vegan/vegetarian (my tweenager will insist on adding cheese to hers) and we will all eat the same thing. But other meals and times I will cook for them, and separately for me.

My children don’t want to do go vegan, even for a month, and the husband is adamant that he will eat what I make him, but that he doesn’t want to be vegan by choice.

I am fine with that.

My kids get to decide their food choices. If they wanted to join me, I would make sure I was providing them with everything they need nutritionally, for a month, but neither want to, and between the tweenager deciding that most vegetables are from the devil and that ketchup is a food group, and working with my small boy who has spent a lot of his life with sensory issues that have meant he has struggled with certain food textures and it’s taken me a long time to get him to eat certain foods and to make sure he eats well, so to try and work him to eating a vegan menu for a month, is more frankly, than I can face. Lazy, maybe, but I work on the basis that at nearly 9 and 12, they can decide what they want to eat and I have to respect that.

So, no, we are not doing Veganuary as a family, and that’s ok. I have had a couple of people give me a hard time, saying I should just make everyone eat vegan, being as I am the one that meal plans and cooks, but frankly, it’s not a hill I want to die on, and I don’t feel I can make them. The husband is a grown adult who can make his own food choices, and I have to respect that too.

So, no, my family isn’t joining me in Veganuary, although they will be eating more vegan meals, and that’s ok.

If you are doing Veganuary, how are you doing it? Your whole family? Just you, some of your family? How is it working for you?