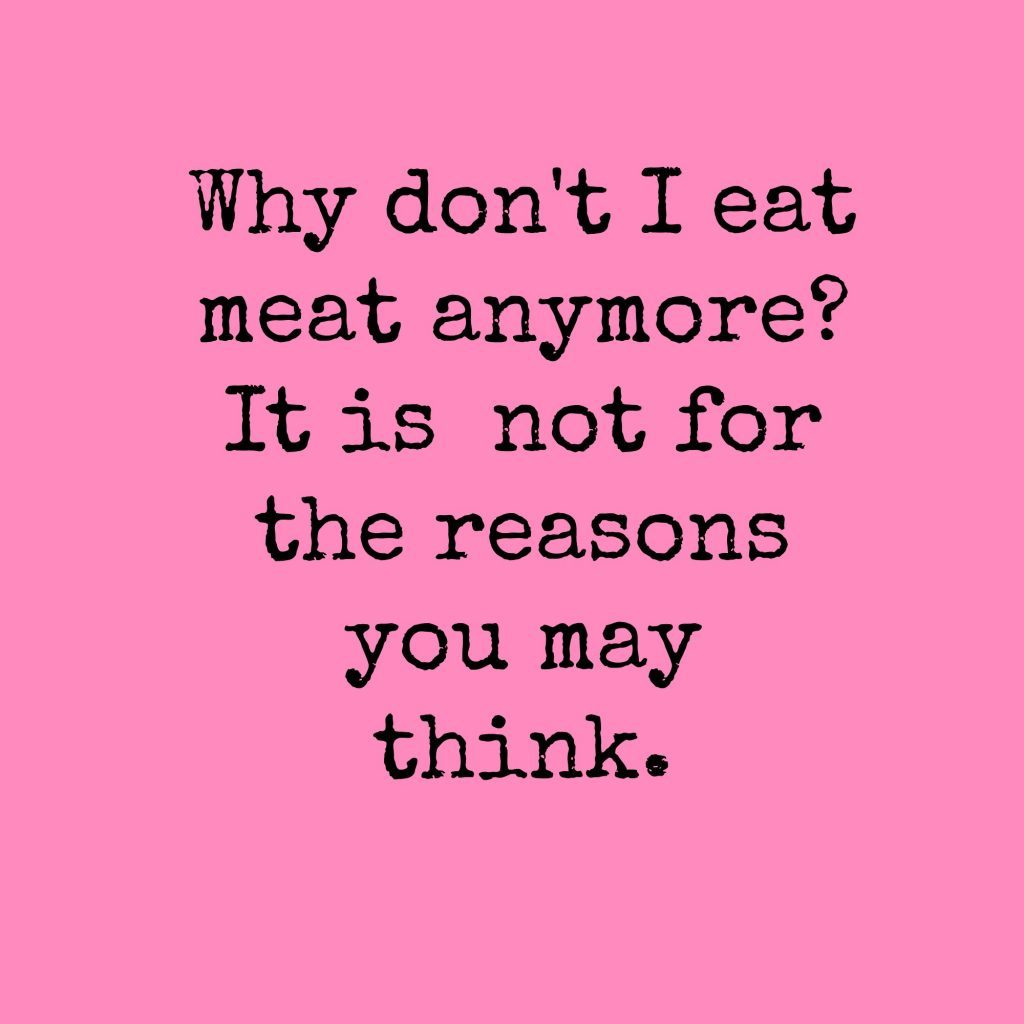 In January of this year, I gave up meat. Well, actually it was almost February, but for most of January I hadn’t eaten much meat. I caused alarm on Facebook by sharing my new quasi vegetarian status and I have shared a few posts about giving up meat.

I have eaten meat occasionally when I have been a guest and someone is not aware of my dietary choices. My mother taught me to be polite as a guest. I am also still currently eating fish, eggs and some dairy products (when I am not cooking for my dairy allergic boys)  but I am going to take part in Veganuary and give up all dairy, eggs etc for a month, to see what it’s like to eat totally plant based.

People have wanted to know why, and I have simply said “I have just gone off meat, so prefer to avoid it”. Which is true.

I haven’t given up meat for ethical reasons, although I am aware that the food industry and animal welfare really don’t do well together, and that a lot of the meat and animal products we eat are sourced in ways that if you read about them would horrify you. The less meat I eat, the more I read, the more aware I am. However that wasn’t my initial reason.

I didn’t give it up to be healthier. Although I have to say my skin issues have cleared up dramatically with eating less or no meat. I have no scientific correlation to back this, just my own observation.

In January of this year, I was pregnant. Again. I also miscarried. Again. But it took 7 weeks to happen, from the day the test showed that faint line, to the final doomed blood test and inevitable physical loss.

From about week four until the end, I couldn’t look at, cook, prepare, or be around meat. Cooking raw meat made me want to throw up and trying to force myself to eat mince, sausages, ham, chicken, etc, made me feel sick. So I stopped eating it.

Once the miscarriage was over. I tried to start eating meat again, and it made me feel ill. The smells and tastes kept triggering me back into the feelings of hormonal nausea, so I stopped trying.

As someone who has suffered from extreme sickness when pregnant, which has resulted in hangups and dislikes of certain foods and smells that were triggers that made me ill when pregnant that I have never recovered from (I cannot stand the smell or taste of anything with ginger in it, I also can’t eat jelly, or anything with jelly in it, for example) this doesn’t really surprise me. My body decided it didn’t like something whilst it was desperately trying to cope with the hormones and not knowing what was wrong or right, and for some reason it hasn’t changed its mind.

It can happen, my therapist, that I am currently seeing, says it happens more than people think, that sometimes people stop wanting to eat certain foods due to physical or emotional trauma associated with those foods or what they represent. She says I may decide I can tolerate meat again, or I might not.

So, for now, and maybe forever, I don’t eat meat. I don’t miss it much. Except bacon, bacon, for some reason, still causes me to have the odd craving. I don’t want to force myself to eat meat, simply to placate others who feel I should “get over it” and make my body and mind do something it doesn’t want to. I don’t want to eat meat to please other people. I just have gone off it, and am happy working my way to a healthy vegetarian based diet. Maybe one day I will want a steak sandwich or maybe I won’t.

So, there you have it. Why I don’t eat meat. Life and the human body can be so weird, but I am ok with that!

Boris Johnson has golden wallpaper, Rishi Sunak has a new swimming pool, Dominic Raab and Liz Truss are fighting over the use of a large mansion. Meanwhile, Tesco workers might not be able to heat their homes this winter, or buy a Christmas dinner because their benefits are cut.

A good husband is never the first to go to sleep at night or the last to awake in the morning.
― Honore de Balzac
#InspirationalQuote