Welcome to our week in photos. This is our weekly catch up for both sets of grandparents who live abroad and don’t get to be as much a part of the daily madness of our lives as much as we and they would like. So we share here for them to get at least a snippet of what we get up to. 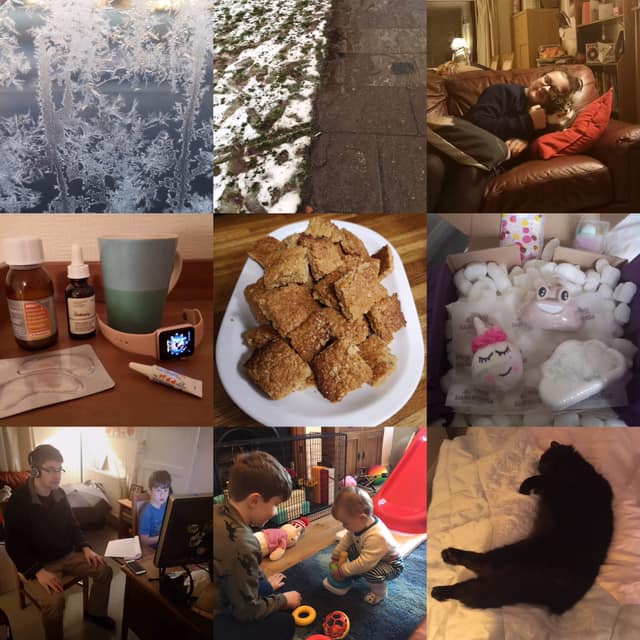 This week we have had school trips to the Kew Archives for the tween, which I was very jealous of, as I have always wanted to go there. She now has to write an essay, about her trip. She is not so keen on that, but I am sure she will manage it. We have also had family time with cousins, and little and bigger boys working together on PowerPoint projects. We have all had various stages of a nasty lurgy that has given us very attractive coughs and runny noses but we are on the mend.

Or lack of it. After much fuss in the media, London had some snow, much not much, mostly turning to ice and slush. The cold weather is pretty, but my kids have been gutted to see other people enjoying snow days, whilst we have had to go to work and school. The small boy has been stalking the weather app on the BBC for days, and is very grumpy that their predicted “Snowmaggedon” as it has been called, for where we are hasn’t come to pass. I can’t say I am that sad, snow causes chaos, and I know it has made life difficult for some people across the country. Roll on spring I say.

Don’t really like the snow or cold weather. I can’t say I blame them. Jasper is fully recovered from his war wounds and is glad not to be pounced on three times a day to have things shoved on him or in him to make him get better. I am now an expert at getting eyedrops into a cat with one hand though, so that’s a new skill I can add to my CV, at least!

Not much to share other than these fabulous flapjacks the tween made for us and work this week. It’s been pretty boring this week eating wise. I will be sharing my thoughts on Veganuary next week.

So that’s it from us. We will be back next week!

Have you got snow where you are?

Posted in Everything else and tagged a photo a day, Our week in photos, project 365, The Story of our Life.