Skip to content
*This post contains health information. It is also written with the consent and knowledge of the husband, we both hope this will be helpful as well as cathartic for us to share. All information linked is from the British Heart Foundation. This is not a sponsored post*

Just over two weeks ago the husband was admitted to hospital.He hadn’t been well for a week or so, with what we thought was a chest infection that was being treated with antibiotics. On the Friday morning he had some symptoms that caused us both concern. My gut and ex nurse instinct told me something wasn’t quite right so I felt A&E was best. He was having some chest and arm pain, nausea and a very severe headache. We called people to come and help and we headed to hospital to get him checked. At the time, in my head, I kept wondering if I was over reacting. Anxiety and health are linked for me.

At about 8:30am whilst we were sat in A&E waiting for blood results and an x-ray to come back a doctor came to get us and told me “his troponin levels are very very high. He needs to be in resuss right now, he’s having a heart attack”. (He’d had some symptoms that made me think that might be the case but also didn’t look that ill either) I’ve never been so scared in my life. They immediately treated him for a heart attack or myocardial infarction as it’s called and he was on monitors and medicated. I called family and a friend who came to be with us and I felt a fear that suddenly I might loose him. I still break down in tears over those few hours, even now, two weeks later.

After a few hours of waiting and being monitored (and the staff in A&E were amazing) they came back and much to our relief said the team at our local big hospital had looked at his tests and bloods and didn’t think it was a heart attack but actually myocarditis. 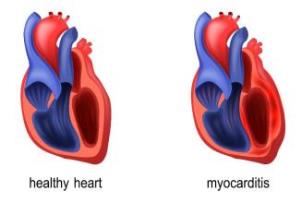 Myocarditis is inflammation of the myocardium – the heart muscle. It’s not related to lifestyle and there are no medical treatments to prevent it.

Most people suffering with myocarditis recover without complications, but in rare cases when inflammation is severe, there can be damage to the heart.

What are the symptoms of myocarditis?

People who have myocarditis usually develop symptoms one to two weeks after the initial viral illness.

Symptoms of myocarditis include:

shortness of breath when lightly exercising or walking

flu like symptoms such as a high temperature, tiredness and fatigue

palpitations or an irregular heart rhythm.

Myocarditis is usually caused by:

a viral, bacterial or fungal infection

sometimes the cause is unknown.

Myocarditis is very rare. The doctors who looked after him told us they see 1-2 cases a year, if there is a particular virus or infection within the community that triggers it.

They also told us that 9 out of 10 people recover from myocarditis with no issues after a period of rest and recovery. There is no reason or rhyme to why someone will get myocarditis, it isn’t caused by lifestyle choices, or stress or diet. It just happens. Some people will not know they have it. Some people will feel like they are having a heart attack. There are some long term health issues that can result from myocarditis, at this point we are looking to the positive that he won’t have to deal with those.

He spent a week in hospital. He had scans, tests, and medical treatment to keep his heart stable and to check there were no other issues. We are currently waiting for the results of a scan to make sure there is no long term damage to his heart, which can happen in some cases.

He is on medication to help his heart, whilst it recovers from the virus. The heart muscle cannot regenerate, so we hope that there is minimal damage. The medication has side effects, which make him feel a bit unwell at certain times of the day, but he is coping, and we are doing all we can to ensure he can rest and recover.

Grateful it wasn’t a heart attack. Grateful for the care he has had and for the NHS which battles on to look after people. We are grateful for family and friends who have loved and supported us either in person or via the phone and social media.

I am grateful for whatever it was inside my head that told me to take him to get checked. The doctor who treated him said that it was possible he could have had a heart attack as a result of the myocarditis.

He is still here, and he will hopefully be back to normal with time and rest.

Life sometimes throws heavy and hard curve balls your way. This last two weeks has made me realise how fragile life is.

*The British Heart Foundation has some information about a heart attack and what to look for for both women and men, please always seek medical help if you have symptoms that may be causing you concern*