As some of you may know, during my two previous pregnancies, I was very unwell. I initially thought I had the usual sickness and nausea that comes with the hormone changes in early pregnancy, but as time went on, it became clear that it was more than that. After continually throwing up, not being able to keep much food down, loosing some weight, feeling dreadful, and ending up having to take time off work, because there were some days when I could barely get out of bed, it was so bad, and the symptoms didn’t ease like they should when the first trimester ended, my doctor told me I had what is known as Hyperemesis Gravidarum. This is a debilitating condition, that can be very serious for both mother and baby, can cause health complications, and is also mentally devastating. It is not just “bad morning sickness”.

Pregnancy is supposed to be an amazing time, growing a new baby and being excited about the new life soon to arrive. I spent 28 weeks the first time round being sick, unable to tolerate most foods, passing out twice, once at work, and once at home, needing to take medications (which I had to practically beg my doctor for) and struggling with side effects that constant nausea and vomiting had on me. My second pregnancy I was sick until 32 weeks, ended up needing hospital treatment, and again had to fight hard to have medication which helped me to cope. It was harder being pregnant and very ill, with a toddler in tow, and that put even more strain on things. Many women suffer from HG, and it’s a horrible thing to have to go through. The condition recently got a lot more media attention when it was found out that Her Royal Highness the Duchess of Cambridge was suffering from it, but it is still misunderstood, women are not always given the correct treatment, and can be made to feel like they need to just suffer, as part of pregnancy.

I am very aware, that if we are lucky enough to conceive a third child, that it is likely, given my history, that the chance of the dreaded HG raising it’s ugly head again are high.

This time I am more aware of my rights and the options available to me, in terms of medication and care, and what I will need to help me survive as well as possible.

I can say, that most of what I know has come from learning a lot from the amazing Caitlin Dean, otherwise known as Spewing Mummy. As someone who suffered with HG twice, she has become a champion for women struggling with the condition, raising awareness, helping to train medical staff to care for women better, and to raise the standards of treatment for HG so that women no longer have to fight to be recognised and heard when they are battling and so unwell. She is the chairperson of Pregnancy Sickness Support, and works tirelessly to help women all over the UK to get the help and care they need as well.

She has written an amazing book Hyperemesis Gravidarum – the Definitive Guide which is an incredibly informative, well written book, that I plan to use as my major tool to help me, to be heard, get what I need, to look after me, and the baby and to try and make sure that we get the best care and treatment. It’s an excellent guide, and if you have suffered with HG but are planning to get pregnant again, I would highly recommend it or it would be very useful if you are a health professional working with pregnant mothers. 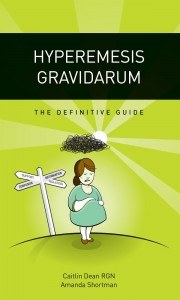 One of my concerns with the possibility of becoming unwell again is the effect it will have on my children. Emily wasn’t old enough to understand what was going on. the last time round, but my being sick and so unwell did take it’s tole on her, and now I have two children who will know what is happening.

Caitlin has also written a book for children. How to be A HG Hero – Helping Children Understand Hyperemesis Gravidarum. 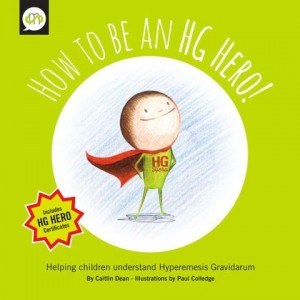 “How to be an HG Hero – helping children understand Hyperemesis Gravidarum, does what it says on the tin… aimed at pre-school to junior school aged children the book enables them to understand what is happening in their world and how they can take a proactive approach as a member of the family “team”.

Following a little child and his mum through an HG pregnancy it offers explanations of what is happening, enables discussion of concerns and worries and makes positive suggestions for children (and relatives) to help the situation.

Author, Caitlin Dean, believes that if you give a child the opportunity to be part of the team, to help mummy when she is ill and an understanding of what is happening in the family, then the impact of HG in their lives can actually be a positive one.

The book contains two “HG Hero Certificates” to cut out and present to your HG Heroes”.

This book would be ideal for any child that is able to start to grasp that Mummy really isn’t well, help them to understand a bit more of what’s going on, and hopefully reduce the impact that HG is having on them and their family. It’s an ideal gift for a friend who has suffered and might be worried about what to say or share with their children if they get pregnant again or for someone already pregnant, who might need it for their children, for someone like us, arming ourselves to be prepared, and also it would be a good resource if you work with children in a health care or education setting.

Posted in Everything else and tagged birth, Hyperemesis Gravidarum, Hyperemesis gravidarum awareness, Pregnancy, Sickness in pregnancy.