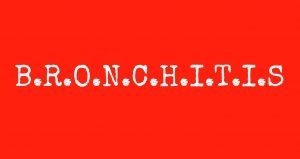 “Bronchitis is inflammation of the bronchi (large and medium-sized airways) in the lungs.Symptoms include coughing up mucus, wheezing, shortness of breath, and chest discomfort.Bronchitis is divided into two types: acute and chronic. Acute bronchitis is also known as a chest cold.”

When you go to bed, with a heavy cold, not feeling particularly well, but hoping it will pass, and that you have just got a few days of feeling snotty and mildly unwell to get through, but wake up in the morning after a night of coughing like an old man with a 50 a day cigarette habit, and your chest hurts when you breathe and you can’t talk without coughing, then you know it’s a tad more than a cold.

I have had bronchitis. It has knocked me for six, in old fashioned cricket terms. I have had to take almost a week off work, and basically spent most of that in bed, or slowly pottering about whilst trying not to cough up what felt like my own lungs.

It’s horrible. It’s also totally viral and there isn’t much to cure it but rest, pain relief, fluids and if you want, a cough medicine from your pharmacy to help ease some of your symptoms. I have had it before, so I know the drill.

Basically, it’s May, and I have been sick with a bug you catch in winter.

I am SO run down, and feeling pretty underwhelmed with life and overwhelmed with how much I actually need to get done to be able to function and keep all plates spinning. I have taken on too much and landed up sick, and having to rely on everyone else to look after me and also keep those plates spinning.

I can’t afford a cook, maid, personal assistant, nanny, housekeeper, and chauffeur (wouldn’t that be nice) or an accountant, so I am doing a whole lot of stuff by myself.

This last week, has been a wake up call. I need to step back, say no a bit more, put my phone down (my life is on there and it keeps everything functioning but it is also stressful because I never switch off) and try and get back a bit of me so that I don’t get worn down so quickly with life.

I have a lot of things I love and enjoy, blogging being one of them, and I feel like when I get sick, things get neglected, including this space I call my own and then I get frustrated with myself and the world around me.

So, whilst bronchitis hasn’t been fun, it has at least been a bit of a nudge that I need to look after myself a bit more. I can’t do the job I do, look after the people around me, and be who I am to those who need me, if I am not looking after myself.

Self care is so vital, isn’t it?

Thanks to Sophie LB for sharing her post about realising what happens when it all gets too much, which also gave me a gentle prod of awareness that I need to stop, step back and look after myself and make sure I am not overdoing it!

Now, I just need this awful cough to go…

Posted in Everything else and tagged bronchitis, mums don't get sick days, self care.