*this post discusses eating disorders, the use of laxatives, bulimia and mental health. If any of these are a trigger issue for you, it may be best you don’t read on. However, if you read this and would like to reach out for some help, or know you are not alone, please do contact me and I can point you towards some helpful sources of support*

It’s rare for me to talk about a part of my past that I walked away from 20 years ago.

It’s also rare for me to stand up and say that something should be restricted and people shouldn’t be able to have the right to just buy them.

The BBC article mentioning that the government is looking at restricting access to laxatives that at the moment can be easily bought over the counter, by anyone, caught my eye today. 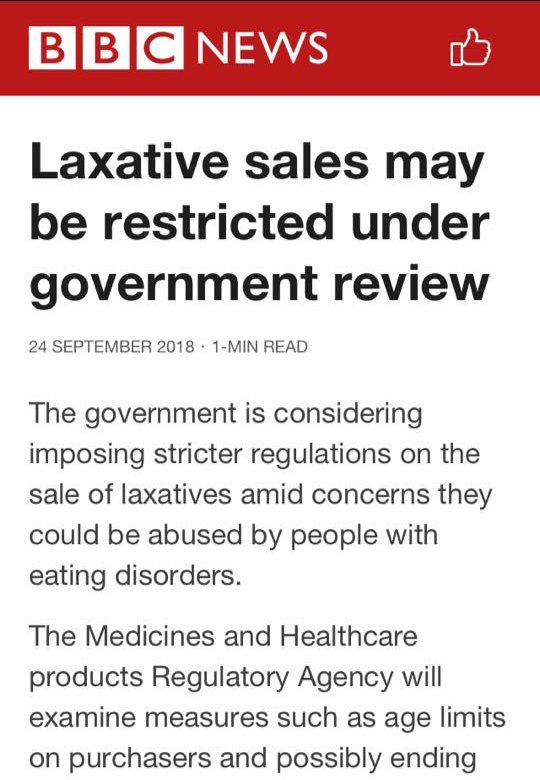 Normally I would chafe at the government telling me what I can and can’t buy or not allowing me to make choices. Normally this would annoy me.

But twenty years ago, I made a choice to walk away from laxative induced bulimia and I fully agree that laxatives should not be so easy to buy.

I am a recovered bulimic. I spent two years dealing with anorexia and two years taking laxatives that helped me to remove the food that I binged on. I almost put myself into kidney failure, my period stopped, my digestive system basically stopped working properly. I wasn’t thin, and I hid it well but I was able to comfort eat a LOT of food to fill the void and temporarily ease my brokenness, and then take 30-40 laxative tablets a day, to clean all that food out before my body could digest it. It meant I didn’t gain weight. I felt terrible most of the time but I functioned.

I stumbled upon laxatives and the idea of flushing my system after a violent bout of food poisoning, where I had diarrhoea and lost almost half a stone in a week! I was on a quest to be and stay thin and I illogically realised that I could give myself diarrhoea, if I ate too much, and I wouldn’t gain weight. Ironically, a friend from school, I knew had struggled with bulimia, but she had made herself vomit after eating. It didn’t occur to me at the time that taking laxatives was the same thing, just a different exit route (sorry for the tmi there) I bought and consumed laxatives almost every day for two years. I didn’t see that I had stepped from restricted eating to bingeing and purging, I just saw it as a way to be able to eat (I loved my food, just not the weight it made me gain) and not gain weight. My mind was a mess and my body was becoming one. My self image and disordered thinking around food and comfort made me do something very dangerous. I think the most tables I took in one day was 45. You can literally walk into most pharmacists and supermarkets and buy them and no one questions. You could just be mildly constipated, or you could be trying to make the contents of your stomach leave. No one checks, or asks you what you are needing them for.

It was only when I ended up in A&E dehydrated and shaking, the doctor who saw me worked out what was going on, told me I was killing my self and referred me into the mental health system and I started to realise that I was broken, hurting, hurting myself and I didn’t actually want to die. I wanted to go to nursing school, to get married and be able to have children. I came home and I made a promise to myself I would never touch laxatives again. I spent time in therapy, and as an outpatient in an eating disorder unit, learning to manage and work through the issues that were causing my warped view of my body and the control food had over me. It took me a long time to be able to view food in a healthy way, and not to want to binge and purge. I was tempted a few times to go and do it again, but found the will to walk away from that temptation.

I could, still in theory, walk into my local supermarket, tomorrow, go the over the counter section where you can buy medication with no restrictions, and buy as many packets of laxatives as I want, and walk out and take them. They are not monitored like pain medication or cold and cough medication. If my tweenager, aged not quite twelve, decided she wanted to take them, she could, and no one would stop her.

Laxatives are a medication that if used sensibly for short term constipation, are an answer for some, but they can be used to facilitate someone purging themselves as part of an eating disorder. I don’t believe they should be so easy to access and buy. We live in a generation where even more pressure is put on girls and young people to look a certain way, social media and peers setting standards where “thin” is still desired. My own daughter has come to me and worried that she isn’t as “skinny” as some of her classmates, and we have had to reassure her that for her height and shape, she is perfect and even if she did have weight issues, we would not want her to take matters into her own hands, so we are very careful about talk of “being fat” and we don’t talk about weight or shape. I am very careful about how I talk about my own body around her and my son.

I think, if I hadn’t been able to get hold of laxative so easily and cheaply, I possibly may not have wandered down the route of using them to purge my body.

Like other medications, they can be kept where you have to ask for them, and there are at least some checks in place. So if a 15 year old walks up the counter in her local pharmacy and asks for three packets of laxative, she will be asked why she wants them, and if she can’t justify why, she won’t be allowed to buy them. \

Yes, in theory someone could buy them online, but again, checks need to be put in place. Someone should not be able to buy more than one packet at a time, or a number of packets in a period of time.

For once, I think it’s right. Close or at least narrow the way someone can damage their bodies.

Laxative use, bingeing and purging, nearly destroyed me. I for one, think restricting their access is a good thing…

I have a 35 hour a week day shifts (between 8am and 10pm) 1:1 working with Dave contract available. £9.50 an hour, full bespoke training given including shadow shifts. contact me at email: the.mambles@gmail.com
#Stourbridge #DownSyndrome #Autism #LearningDisability

My dad is funny. He doesn't believe in Father's Day. He thinks it's 'made up'. We still get him a card and present though 😃